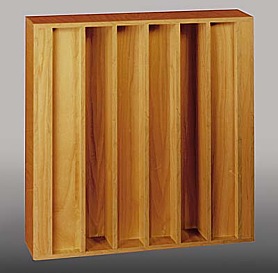 The QRD 734 Diffusor has proven to be the most popular and versatile diffusor in the RPG® product line. It’s wide bandwidth, low cost, and broad selection of finishes make it a logical choice for music education facilities, recording studios, worship spaces, auditoriums, theaters, and performing arts facilities. This one dimensional diffusor is a modular, computer designed phase grating which produces a directional hemidisc polar response that can be oriented in any direction. It also provides low frequency absorption below the design bandwidth due to the RPG pressure gradient mechanism.
0.gif (77 bytes)

Problem
Interfering reflections that degrade speech intelligibility, gain before feedback, and music quality can be controlled by absorption and diffusion. Since commercial surfaces that provided uniform diffusion over a wide frequency range and for all angles of incidence were not available, absorption was used solely to control reflections. This treatment created ®dead” spaces..
Solution
In 1983, RPG® introduced the first commercial QRD 734 Diffusor, based on mathematical number theory. Now a predictable diffusive surface treatment is readily available.

Compared to a flat reflector panel, the QRD 734 Diffusor offers significant diffusion above the diffraction limit of 565Hz, which is equal to the speed of sound (1130ft/sec) divided by the 2′ dimension of the panel. As the frequency increases above 565Hz, the graph indicates how the reference reflector becomes more and more specular, whereas the QRD 734 Diffusor provides a uniform diffusivity.

The QRD® 734 is typically mounted on a cleat and secured. For installations that require a flush mount the units are framed out much like an opening for a window.